Role: My responsibilities on this project included user experience design, wireframes, mockups, 2d and 3d animation, illustration, front-end development, and a fair amount of partner wrangling.
Status: This project can be seen every year during the month of December at noradsanta.org. To learn more about NORAD Tracks Santa during other months of the year, go to NORAD's about page.

The Project
The institution of NORAD Tracks Santa, which came about through the combination of a misprinted Sears ad, a curious kid, and a quick thinking Air Force colonel continues to grow and adapt every year. Due to various laws and regulations, NORAD cannot fund the development of this website, so its existence depends upon the volunteer efforts and financial backing of its contributors and partners. iLink's role in this effort is to serve as a central hub which takes the content from our many partners and integrates it into the website which we design, redesign, implement, maintain, and publish.

The Process
Over the years I've been a part of this project, I've found that each year requires a slightly different approach depending on the needs of the situation, how much time and effort each participant is able to provide. Coordination and constant collaboration is key to success on any such widely distributed project.

Step One. We review last year’s process and metrics, taking into account our own post mortem notes from early January and any feedback or requests from our partners.
Step Two. We draw up a plan for how this year can be better.
Step Two and One Half. We narrow down the scope and craft a more manageable plan all our partners and our accounting department can support.
Step Three. We get to work! Our progress is managed by the fine folks at NORAD. We gather weekly with all our partners, discuss progress and roadblocks and adjust plans where needed. Their meeting organization prowess is second to none. It’s really a joy to work with these folks.
Step Four. We launch and spend December watching over the site, and making fixes and adjustments where needed.
Step Five. We review our work and draw up a post mortem for next year. Some years, we create grand plans which we hope to inspire our efforts the following year.
Wearing Many Hats
My participation in the NORAD Tracks Santa project allows me the opportunity to practice a wide array of skills. A few of my favorites are listed below.
User Research
It always makes me happy when we get a budget for user research. It just makes things easier and our products better. We were able to engage Blink UX to help us with a series of user research sessions from which we derived a lot of useful information. This data allowed us to make strong arguments for much needed change.

Point One. The age range of our largest groups of users skewed younger than was originally anticipated. The recruiting process for this alone showed us that it was harder to find kids older than 6 who still believed in Santa Claus. Due to this, much of the site wasn't really as fun or engaging as it should be. We took steps to simplify the text, make it easier for parents read to their kids, and included more imagery wherever possible.
Point Two. While the art style created by a previous partner was quite enjoyed by most people we talked to, users reported that it felt like it was aimed more at boys than it was for everyone. To help with remedy this, we worked on brightening the overall feel of the site. We increased the types and presentations of elves to better represent the diversity of children who may be viewing them. We added girlish elves, costumes, hairstyles, and added additional skin colors to our offerings.
Point Three. Nearly all of our users were coming to the site to primarily play the games we had on offer. That fact coupled with the data from our site metrics had us exploring ways to make it easier to get to the games, but also do a better job of surfacing the content that was important to NORAD. While the Santa Tracker is a fun holiday tradition, it does have the mission of educating people about the mission of NORAD itself, and we didn't want to neglect that particular business goal.
3d Modeling and Animation
This is one of the few projects for which I get to exercise skills I learned during my years as a games artist. The call for more visual interest allowed me the opportunity to design and model a cute little elf. At the time, I hadn't done much in the way of rigging for animation, so this was a great learning opportunity.

In subsequent years, as mentioned above, there was a call to diversify our cast of elves and create a better, more representative selection of these little people.

We also began to add new buildings as the site expanded and was reorganized. The process usually started with a rough sketch over an existing screenshot. Partners were kept in the loop with WIP previews. 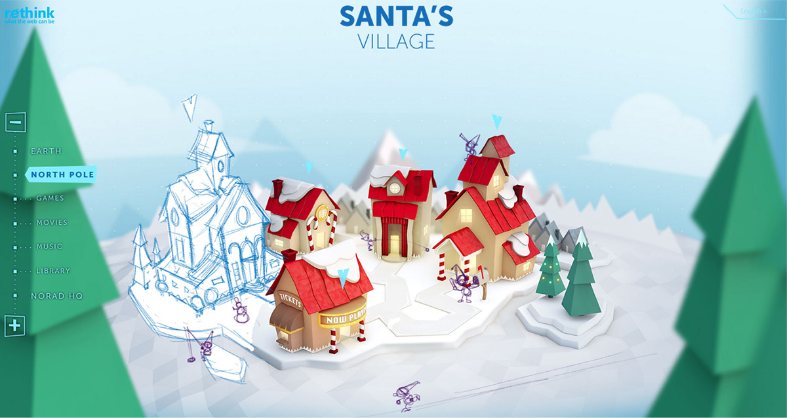 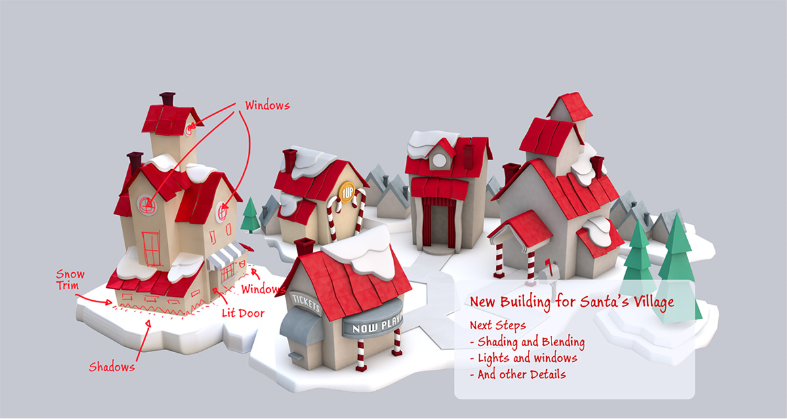 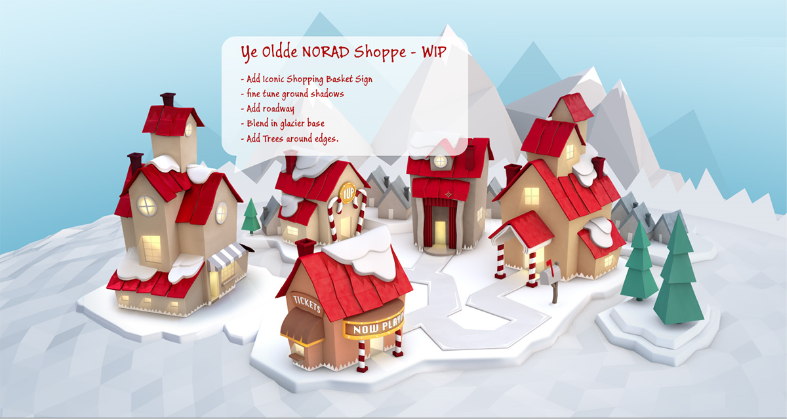 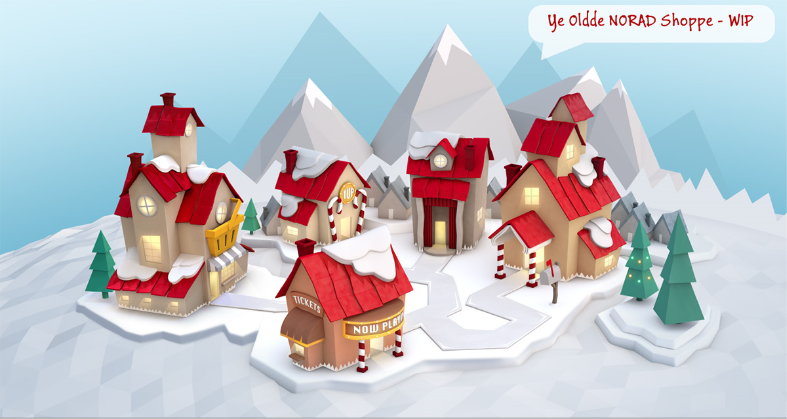 Front End Development
Much of the front-end HTML, CSS, and JavaScript was handled by Jeffery and me. This allowed us to iterate very quickly on our designs in-browser. We could then quickly publish, share our changes, and elicit conversation and feedback from our partners. Each year, we would do our best to streamline our code and update everything to follow developing best practices.

Illustration
We added a series of faked children’s books that took after the old Golden Books many of us grew up with.

Working With Our Many Partners
There are a lot of folks involved in NORAD Tracks Santa and they're all actively engaged in creating something they believe in. It's inspiring to work with people who care so much about a non-profit project. I look forward to this gig every year.

Scaling up From Spreadsheets

Modernizing a Legacy While Maintaining Familiarity
↑Back to Top